Posted by Dan Oldfield · December 01, 2018 6:15 PM
Canadian taxpayers are being played for suckers and enough is enough.
The latest bombshell from General Motors is the announcement of the elimination of 15,000 jobs across North America. In real terms, 15,000 households will lose their primary source of income. Along with that are the tens of thousands of families who work in spin-off businesses who will also be in jeopardy.
In Oshawa alone, it’s estimated that the GM operations result in more than a billion dollars in federal and provincial taxes being paid every year and 33,000 spin-off jobs are linked to the city’s automobile industry. The closure of the plant there will also see more than $5 billion cut from Ontario’s gross domestic product. The impact will be far reaching.
It was less than a decade ago that Canadian taxpayers bailed out General Motors to the tune of more than $10 billion, accepting the argument that it was all about saving jobs. In reality, it turns out it was all about saving stockholders, banks and billionaires.
At the end of the day, the very rich will all be looked after. Within hours of the announcement of the job cuts, GM stock prices jumped by more than five per cent. It’s a sick world where the loss of jobs of hard-working people is good news for those who, when it comes to making cars, have not invested a minute of labour or a drop of sweat.
Read more
1 reaction Share

Doug Ford’s neon sign declaring Ontario open for business is up. And it isn’t pretty.

Today the Ford government announced its plan to roll back improvements to workers’ rights. The omnibus “Making Ontario Open for Business Act” makes it clear that workers are little more than liabilities on the balance sheet.

The pro-business legislation freezes the minimum wage at $14 per hour till 2020. It repeals most of Bill 148, including the two paid sick days for workers and pay equity for part-time employees. It cancels the 10 personal emergency days and scraps the Ontario College of Trades which governs apprenticeships in the province. And it repeals changes to the Labour Relations Act that had made it easier for workers to join a union.

We Are Oshawa has been an active participant in the Fight for $15 and Fairness campaign.

As a community organization with a focus on lifting people up – up out of poverty, out of homelessness – we believe that a living wage, fair treatment and job security are key to achieving those goals.

We condemn today’s action by Doug Ford and his Conservatives. We will be working with the Durham Region Labour Council and other labour and community organizations to let this regressive government know we won’t be silent.

Watch our Facebook page for more on making your voice heard.

Here’s a quick summary of what happened at our latest Membership Meeting:

We were pleased to have 19 people in attendance for this meeting including several new faces.

Elections were held to fill two vacancies on the Executive Committee. Tom Mitchell and Liam Mullins were elected. The membership thanked Sawyer Arnold and Kaitlin Namek for their contributions.

The $15 & Fairness campaign will continue with actions planned weekly till January 1st, 2019. If the Ford government repeals Bill 148 (the Employment Standards Act), heightened action will be launched immediately.

The online survey will be live until September 27th. If you haven't filled it out already, here's the link:

So far, affordable housing and better support for shelters for homeless people top the list of what people are most concerned about in Oshawa.

Five working groups were established to help us build capacity and realize the potential of We Are Oshawa with people signing up:

There's still room to take part and we'd love to have you join us. If you’re interested in participating in any of the committees, please contact a member of the Executive.

Discussion of a proposed Mission & Values Statement was discussed and referred to the Executive Committee for review. The Statement will provide focus for a Strategic Planning Workshop planned for late November.

Tax Cuts and Other Myths

Posted by Dan Oldfield · September 12, 2018 10:56 PM
Ontario’s Legislature returns to business on September 24th and the province’s wealthiest individuals and corporations are starting to lick their chops waiting for yet another big tax cut. They’re also looking forward to the evisceration of recently won gains for working people.
Premier Ford is about to take another yellowing page or two out of the Donald Trump playbook. The Conservatives have pledged to cut corporate tax rates from 11.5 per cent to 10.5 per cent. As well, the government has said it will cut taxes for the so-called little guy. Of course, that depends on how you define the “little guy.”
But it’s not all it seems. Sheila Block, a senior economist with the Canadian Centre for Policy Alternatives, has calculated that somebody making between $39,000 and $49,000 will save a whopping $18 annually. Compare that to someone making who is making more than $109,000 who will come out more than $1,168 ahead.
The theory that tax cuts create a new-found wealth that will somehow trickle down to the rest of society is an old one that’s never been proven correct.  It is not the only theory that allows economic inequity to exist but it is one with an amazing shelf life that defies reality.
Read more
Add your reaction Share 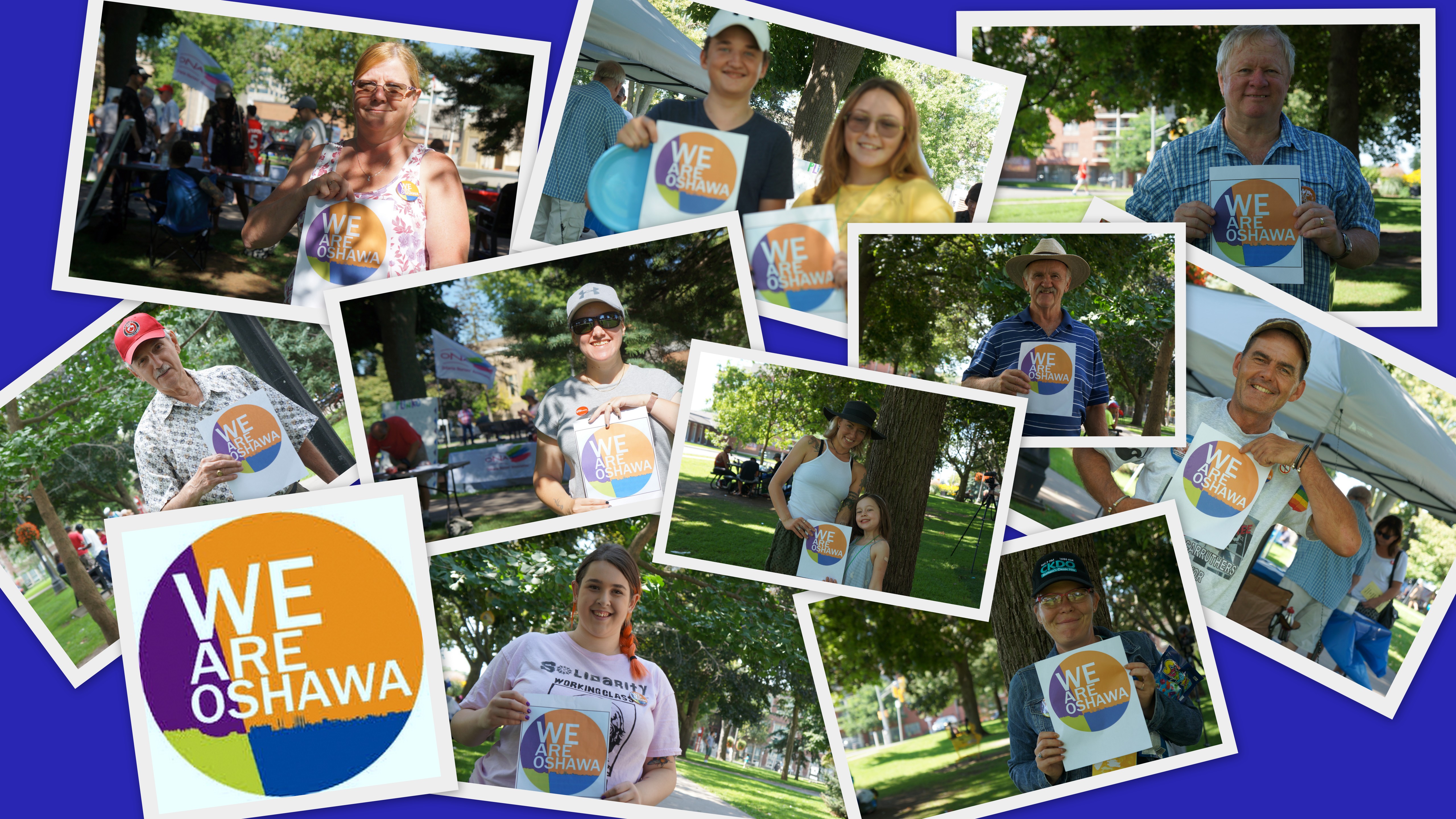 After a great afternoon with community and friends at Memorial Park on Labour Day, We Are Oshawa is looking to build on that energy as we redefine who we are in this great city, and plan what comes next for our organization.

Over the years, we've had considerable successes in mobilizing the community to join our fight - to keep door-to-door postal delivery, to have universal and accessible childcare, and to increase the minimum wage and employment standards for all Ontarians. And as we continue the fight for $15 and Fairness, we must always keep one eye on the future.

We are at an exciting time of renewal in our organization. We hope to recommit to empowering and mobilizing the residents of Oshawa to become active agents for social change in our community. But as many organizations step forward to also do this work, it is important for us to redefine our role and place in the community. It's time to refocus our efforts, to expand our reach, to communicate more widely, to have an even greater impact!

We cannot do that alone. We need thinkers, and doers! We need people with energy, and ideas. We need you!

Please come to this important general meeting where we will discuss the direction of our organization, as well as elect 2 new Board members to join in this important work. Bring a friend!

WAO at the Labour Day Picnic

A great day at the Labour Day Picnic! Thanks to everyone who stopped by.

WE NEED TO HEAR FROM YOU!

PLEASE FILL OUT OUR SURVEY!

We’re currently taking some time to review our purpose to better define our place in the community.

We want to build our capacity and community engagement to make us more effective in helping Oshawa to become a progressive and compassionate city. And we need to hear from you!

We'd appreciate you taking five minutes to complete the survey in the link below:

(If you received this by email, the links to the survey are the same.)

Thanks for the feedback! We'll be in touch soon.

GIVEN the latest Statistics Canada report on booming employment numbers in Ontario since the introduction of the $14 minimum wage, I’m eagerly awaiting the announcement of the big winner of the Fraser Institute’s student essay contest.

When it was announced this past January, it was all made to sound like a civic-minded gesture. Fifteen hundred bucks to the winning kid.

But not content to let facts speak for themselves, as usual with all things Fraser, it set out to fix the game. The topic for these student essays? “Increasing the Minimum Wage: Good Intentions, Bad Policy?”

Before sending the students on their way, the institute wanted them to understand what it would take to win. It demanded that contestants accept a couple of premises. First it claimed, “Proponents of a higher minimum wage tout that such increase will be an effective tool for helping those in poverty.

“But a recent study by the Fraser Institute found that 88 per cent of minimum wage earners in Canada do not actually live in low-income households.”

If that isn’t enough to assure a biased finding, there was more. The institute went on to state, “Beyond the misperception that the majority of the benefits from an increase in the minimum wage would go to low-income earners and the most vulnerable, raising the minimum wage has been shown to lead to reductions in employment, particularly for young people and immigrants.”

Both statements have been proven repeatedly to be flat wrong.

Death of Basic Income a Sign of Things to Come

WE SHOULD have seen it coming when one of the first acts of the new Ford government was to fire the provincial science officer.

This rejection of science, the systematic study of the physical and natural world, puts an exclamation mark on this government’s clear intention to reject any fact-based decision-making.

Instead what we will be experiencing is government by ideology. It’s the same unsupported core beliefs that keep justifying massive tax relief to the wealthiest in society while punishing those less able to fend for themselves.